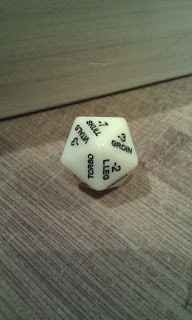 It's got 6 Torso sides, left and right versions for arms, legs, feet, and hands.
It's also got vitals, groin, face, neck, and 2 sides with skull.
All sides also have the corresponding negative to-hit modifier.
The good people over at CustomDice.com helped me with the physical construction of this device.
It was quite expensive, it being custom made and all, $50 for two dice. But it was definitely worth it.
Now, when I attack the players I roll this baby with my standard GURPS issue 3d6 and just add up all the numbers.
A vitals impaling hit for 14 damage before multiplication?? Not my fault!
Voila!
Posted by BRUTUS MOTOR at 3:51 AM No comments:

THE GOOD, THE BAD, AND THE DICE

Repost and answer. Or, if you don't have a blog, answer in the comments. Or be a big rebel and do neither.
:)
1. If you had to pick a single invention in a game you were most proud of what would it be?
The Magaij. An overly magical race of sexless mages. Small statured, rather ugly to behold, and with hideous raspy voices.


2. When was the last time you GMed?
December 3rd.
3. When was the last time you played?
October 11th.
4. Give us a one-sentence pitch for an adventure you haven't run but would like to.
The crew of the Dream-Ship searches for the Library of Forgotten Truths.
5. What do you do while you wait for players to do things?
Have a cigarette, look over notes, make a small joke, etc....
6. What, if anything, do you eat while you play?
Pizza, snacks and candy.
7. Do you find GMing physically exhausting?
No
8. What was the last interesting (to you, anyway) thing you remember a PC you were running doing?
Shadowing the other players for nearly an entire session(it was my first session in the campaign).
9. Do your players take your serious setting and make it unserious? Vice versa? Neither?
Not really. We usually joke alot when we're playing, but I don't feel like it's ruining anything.
10. What do you do with goblins?
I fill entire battlemaps with them!
11. What was the last non-RPG thing you saw that you converted into game material (background, setting, trap, etc.)?
A jewelry butterfly made out of clock parts. Going to use it as a Clockwork Fairy(as a familiar).
12. What's the funniest table moment you can remember right now?
Probably some kind of lame joke. I'm not much of a comedy writer, so I'll skip this one.
13. What was the last game book you looked at--aside from things you referenced in a game--why were you looking at it?
Green Ronins, The Black Company Setting. I'm currently making a map of Glen Cooks world for a friend of mine who's using it for his own Black Company campaign.
14. Who's your idea of the perfect RPG illustrator?
Oscar Chichoni with Tony Diterlizzi on a close second.
15. Does your game ever make your players genuinely afraid?
It has been known to happen.
16. What was the best time you ever had running an adventure you didn't write? (If ever)
Never have.
17. What would be the ideal physical set up to run a game in?
Ooh, I've been wanting my own RPG room for ages. Cabin interior, fireplace, chesterfield furniture, walls decorated with maps of my campaign and inspirational imagery. You get the point?
18. If you had to think of the two most disparate games or game products that you like what would they be?
GURPS 4E and Cyberpunk 2020.
19. If you had to think of the most disparate influences overall on your game, what would they be?
Maps(I am crazy about maps) and movies.
20. As a GM, what kind of player do you want at your table?
Role-players, not roll players.
21. What's a real life experience you've translated into game terms?
Well....... Naming goddesses after girlfriends, and then having to change their names every now and then:)
22. Is there an RPG product that you wish existed but doesn't?
A working, cool looking, graphical character creation program for GURPS 4E.
23. Is there anyone you know who you talk about RPGs with who doesn't play? How do those conversations go?
Well I sometimes have to explain RPGs to people who don't play, and I work my ideas off of my girlfriend who doesn't play. Yet!
There you have it. My thoughts for your penny.
Posted by BRUTUS MOTOR at 3:27 AM No comments:

Email ThisBlogThis!Share to TwitterShare to FacebookShare to Pinterest
Labels: rpg

NO COUNTRY FOR OLD DICE

This. Is. Damn. Cool.
Being a master of all things procrastination, I have not written this before.
Got my dice just before christmas, so it goes without saying this was my favorite present this year (not including a concert-ticket to go see mr. Reggie Watts)! 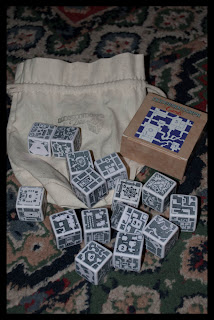 I haven't got much to say, but I will say that it was with great pride, and an even bigger grin, I opened the package from Joe Wetzel, the instigator of this great (and long awaited) project.
It did take an awful long time, but Joe (and all the other designers), it was well worth the wait. I don't imagine similar products made by bigger companies take any less time.
How I'm supposed to make use of these have been on my mind since the day the Kickstarter thing reached its first pledge-goal, and as soon as my current campaign ends, I will be starting a total randomized hexcrawl-campaign using the dice for dungeons and whatnot.
So, once again, thanks a bunch, Joe, for letting me be a part of this alongside the masters of the GeoMorph-trade(glad you're back Dyson!! you got me seriously worried there for a while).
Now, if you'll excuse me, it's caturday and I've got some cold ones waiting for me! :)
PS#1: Buy some!
PS#2: Buy several sets!
Posted by BRUTUS MOTOR at 6:44 PM No comments:

What I GM - GURPS 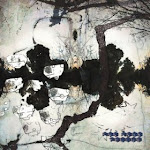